Make room for Me as you decide what to keep and what to discard as you embody these gifts of wisdom I have revealed to you.

I AM the messenger & when you are ready, you are the recipient

There is a Zen proverb that reads:  What you seek, is seeking you.

I wonder how many times I have searched for meaning to an event in my life, only to fall short of its illusive wisdom. How many times have I pounded my fists and cried out, ‘What is my purpose?‘ and then pause only to hear an echoed silence.  Why don’t we ‘hear’ Creator’s response?   Perhaps we are waiting for words that will never come. Perhaps those divine answers come to us via images, dreams, and even the absurd.

I think about that Zen wisdom now and apply it as a template over this story about my grandmother’s death in 1970 and it’s threaded connection to my Egyptian trip in 1996.      The Messenger visited and unknown to me at the time, I was ready.

During the summer of 1970 I was 16 years old. Living at home with three of my siblings, we often assembled for dinner with my parents around a table of teenage angst and nervous foot tapping.  We were your typical large family that grew out of the 1950’s.  Of Midwest origin, strong and proud, we were raised to be creative and independent.

That night in 1970, I was upstairs, hiding out as young teenagers do, with my sister when mother called us down for dinner.  Ugh.  I just wanted to stay in my room and gossip with her about the day’s adventure.  But we always obeyed when called and scrambled down the stairs, beating our brother to the table.  Passing dishes to each other, skipping the green beans with sliced almonds, we managed to share a word or two amongst ourselves.

Breaking through the awkward silence, the phone rang and mother jumped to answer it.  Her mother, my grandmother, had been in the hospital that week struggling with multiple ailments that often accompany an eighty eight year old elder. Grandmother had always been a special part of our lives.  She lived in her home just blocks away and was at our table for every holiday event. She watched over us when our parents traveled, wore funny black shoes with stockings that stopped just short of her knees. and often wore an apron as she busied herself around the house.

Mom blurted out from the other room, “That was the hospital.  They want me there right away.  Mother is fading.

My Mother cherished her mom and so did I.  I was her favorite of the five grandchildren.  I shared her green eyes and willful nature.  She had been a nurse during WWI in France.  She even stayed on after the war ended and explored more of Europe.  Not a common occurrence for women of that time.  So I wasn’t too surprised by my mothers next request.

“You’re coming with me” she commanded while pointing in my direction. “We must leave now, no time to finish your dinner.  The rest of you stay and I’ll call you from the hospital.” 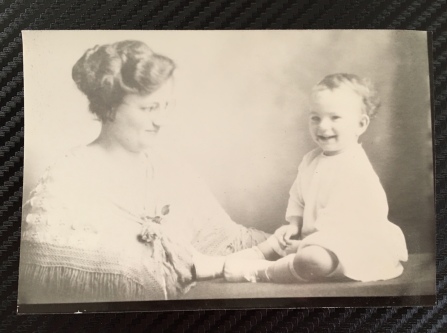 My teenage dread hit an all time high.  I had never been at the bedside of a dying person. And this was my beloved grandmother who loved my corny handmade Christmas crafts and clapped loudly at every piano recital.  I wasn’t sure I could handle it so when I was alone with mom, heading out the door, I asked her why she had demanded that it only be me. She stopped just short of the car and turned to hold my gaze for a moment, then said to me, ‘Because you are meant to go.’

Looking back now I understand what she meant.

Arriving at my grandmothers hospital room, I chose to stand outside the cracked door as my mother entered alone.  A nurse was leaning over grandmother and she put an arm around Mom to comfort her.  I knew in that instant that grandmother had passed.  Sobbing lightly, mom called for me to enter.  I stood motionless, trying to catch my breath and calm my anxiety about being so close to grandmother as well as witnessing my mothers grief.  I couldn’t remember seeing mom cry this hard before and I wanted to hold her and tell her everything was going to be alright.

I stepped into the room slowly, trying to avoid my grandmothers body.  But I could see her hands resting along side her draped form.  The room filled with a heavy stillness as I moved closer to her.  Filtered light from a fading summer sun was stretching across the room casting a warm glow upon her bed.

Trying to appear composed and adult-like I stood on the opposite side of the bed with my head down and hands crossed in front of me.  I could almost touch her. Instead the cold steel bed railing kept me at bay.  My mind filled with images of how much I loved her as I slowly lifted my eyes to recapture her presence one final time.

I could only hear my slow, deep breathing when it started. The sounds of my mother’s grief faded into the background as the most extraordinary images began to emerge along the delicate skin of my grandmothers exposed hands and arms.  These images appeared first as if they were muted tattoos stretching from finger tips to her shoulders.  Gently emerging from below the surface of her skin, they felt hidden, secret, and very very ancient.  Thin vertical lines of what appeared to be Egyptian hieroglyphic symbols were now fully exposed to me and I shot a look across the bed to my mother and the attending nurse. ‘Could they see this too? Are they afraid like I am?”

They both felt so far away in that moment, as if the distance across grandmother’s bed was yards instead of feet.  I could tell they were not aware of what was taking place and looked down again, this time taking in her entire body.

Something had changed between that moment of glances.  The sheet covering her body became translucent and now I was able to see her completely.  From head to toe, the same muted inscriptions were emerging and slowly becoming clear.

“Words and phrases once parroted become Alive within you…”

Still in full wonderment of what I was witnessing across my grandmothers body, I again looked across the bed to mother, bewildered beyond words, seeking recognition, some kind of confirmation that this was real.   After all, I was standing in the same room, breathing, awake, grieving and conscious.  How is it that I could ‘see’ something they could not?

“When you are ready…”

My hands reached for the bed rail. My mother glanced over at me whispering, “You can touch her, its ok”.  I knew she did not see the thousands of symbols which now encompassed her mother’s body.  Perhaps she wanted me to fully embrace her death and hold her hand one last time.  But I was afraid.  Afraid of what I was experiencing.  My mind raced for understanding, for definition of how this could be.  My Lutheran background had not prepared me for mysticism. My family had not exposed me to the dying process.

I moved my hand closer to her when suddenly the images began to slowly move in perfect unison.  Line upon line of Egyptian scripture pulsed up and down her body. It was if all the images were alive, coming from some place deep within her… being released through her upon death.

And I was the recipient.

I never shared what happened to me in that hospital room back in 1970.  The event felt private and sacred, even to a sixteen year old. I didn’t feel the need to explain it or define it.  It simply faded back into me much like it emerged from within her.  Silent, ancient, drifting deeper and deeper…waiting to be awakened.

Journey to Egypt TO BE CONTINUED…